Polyculture was engaged to assess the opportunities for a new non-diary alternative and help a client develop a product that would stand out in an increasingly crowded category.

As more consumers become conscious of their health and the environment, many have turned to plant-based foods as a permanent dairy replacement. Our client was determined to break into this highly competitive category, so we developed a strategy that would help them capture value by doing something entirely different.

Our first step was to identify the nutritional attributes across the wide variety of available plant bases in order to slowly narrow down our choices to something that would address an unmet need. All plant milks can fit into one of the following  4 sub-categories: Nuts, Legumes, Grains and Seeds. 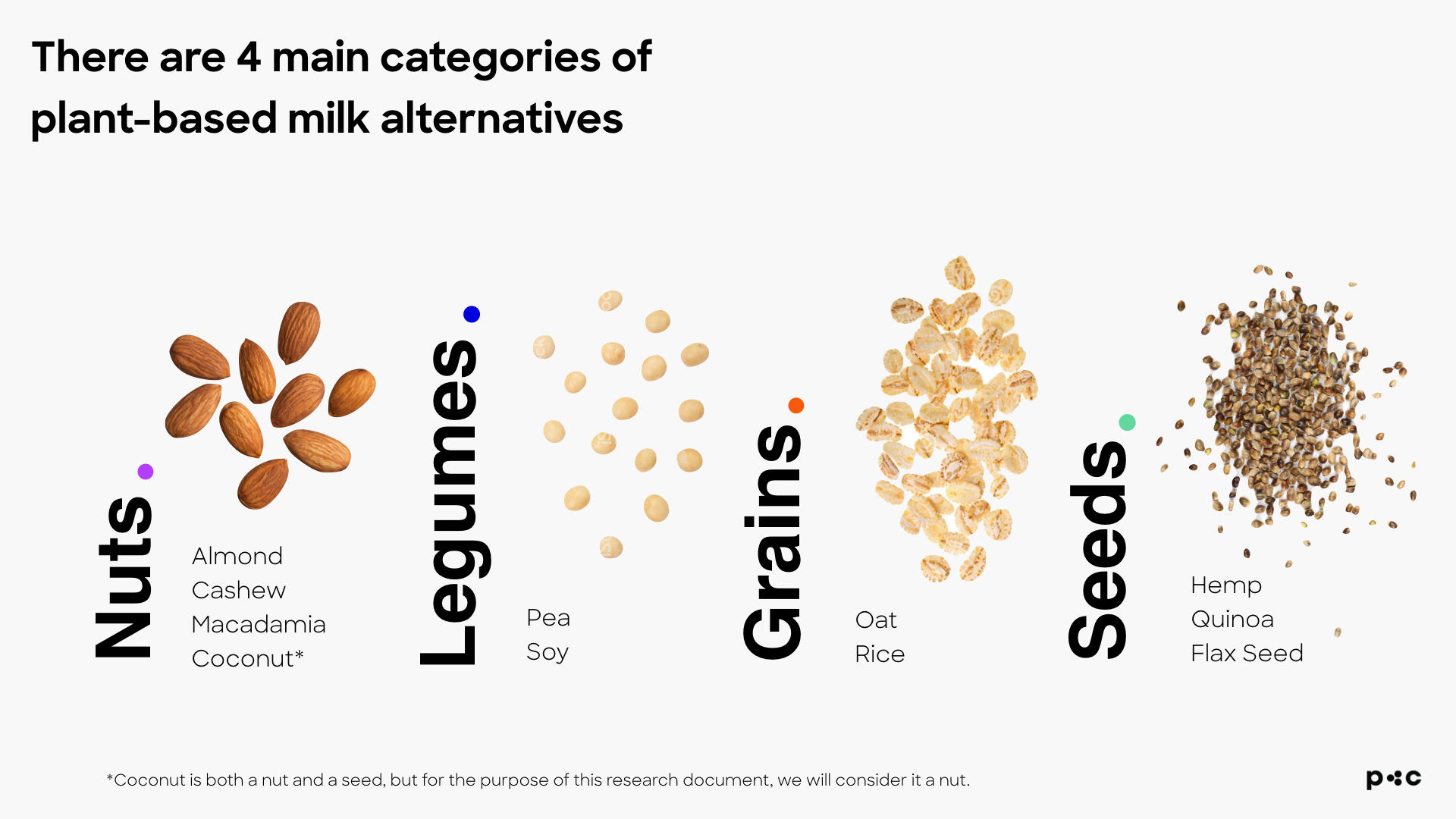 The Nut milk category contained popular favorites like Almond, Cashew, Coconut and Macadamia. Legumes consisted of classics like Soy and new innovations like Pea. Grains had Rice and the popular Oat milk bases; and, finally, Seeds were comprised of Hemp, Quinoa and Flax.

While there are many more plant bases that fit into each sub-category, we only included the dominant players in our main analysis.

After analyzing the nutritional profiles of 11 different classes of plant milk, we found compelling patterns in terms of Protein, Fat and Calorie Count that made each sub-category unique from one another. 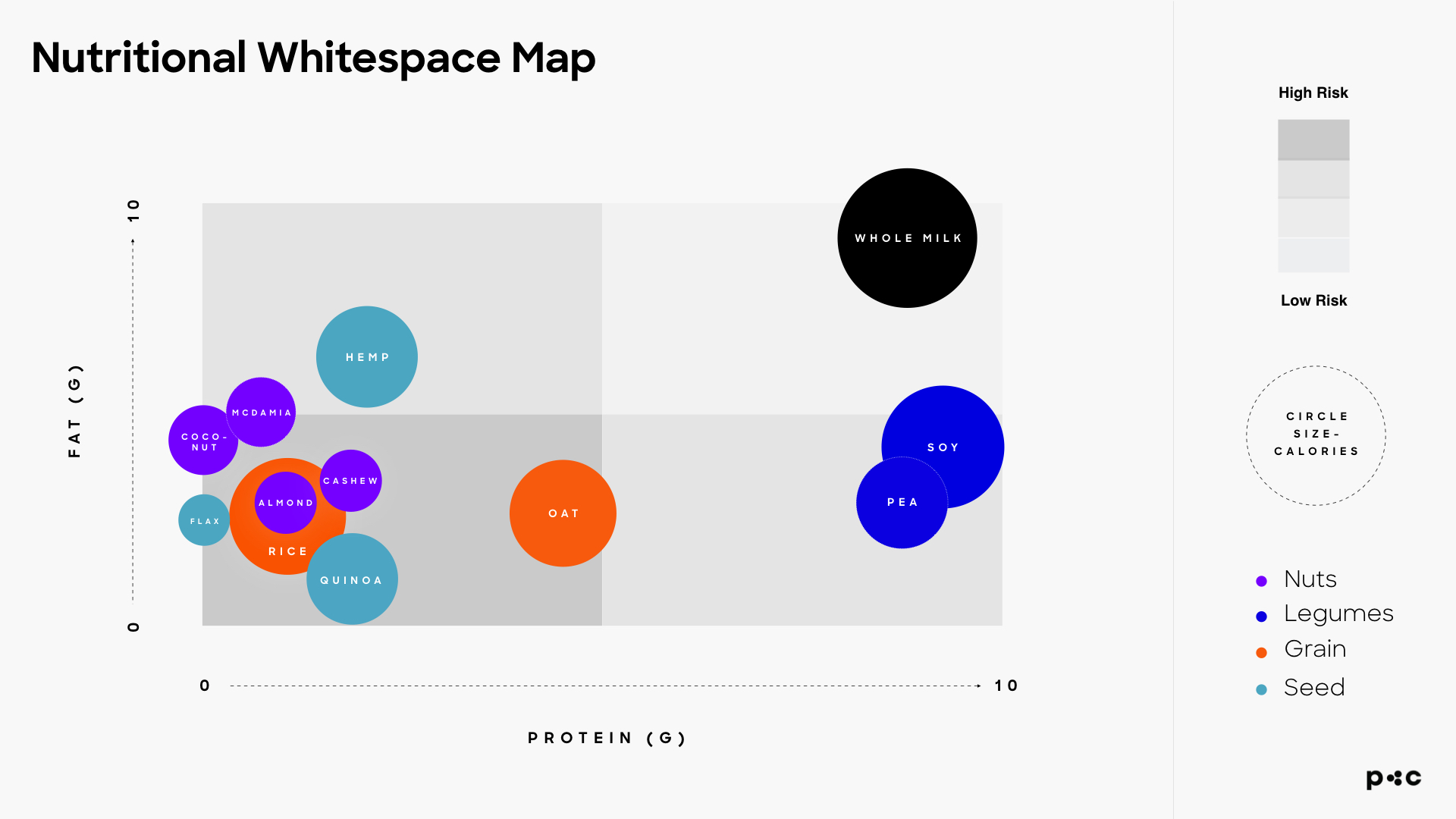 In the nutritional whitespace map above, we found that most Nut, Seed and Grain milks were clustered in the bottom left quadrant (low protein, low fat).

In stark contrast, Legumes such as Soy and Pea milk possessed a high calorie count along with high protein.

While Nut milks tended to be lower in calorie, Grain and Seed milks were generally distinguished by higher calories. It is important to point out, however, that some seed milks such as flax did possess nutritional profiles similar to your typical nut milk.

The basic nutritional whitespace mapping demonstrated that competition in terms of the basic value proposition was highest for plant milks that aimed to offer consumers low calorie, fat and protein alternatives to traditional dairy. Legumes were uniquely positioned in so far as they packed dense nutritional benefits that were not overcrowded by a wide variety of plant base competitors.

We could then draw certain assumptions about the natural positioning of each of the sub-categories from the perspective of the consumer.

What became clear in the figure below was that nuts had a nutritional profile that was perfect for weight control due to their low calorie count and low protein and fat content.

Grains, on the other hand, were high in calories and failed to offer enough protein to be seen as an effective source of nutrition; this suggested that a defining driver of grain milk sales such as oat or rice would be taste. In other words, grain milks needed to over-perform in terms of taste to compete against their more nutritionally beneficial counterparts.

Seeds, surprisingly, did not present any clear correlation in terms of their nutritional profile. While hemp was extremely high in fat and calories, flax seeds and quinoa were relatively light on those fronts – making it hard to draw a consistent conclusion.

Legumes were consistently high in protein and calorie count, which made this sub-category great for consumers looking to build muscle or bulk up their diet with a nutritious plant-base alternative. It is no wonder then that brands like Ripple, a popular pea milk, target young children in need of a filling and fortifying breakfast plant milk. 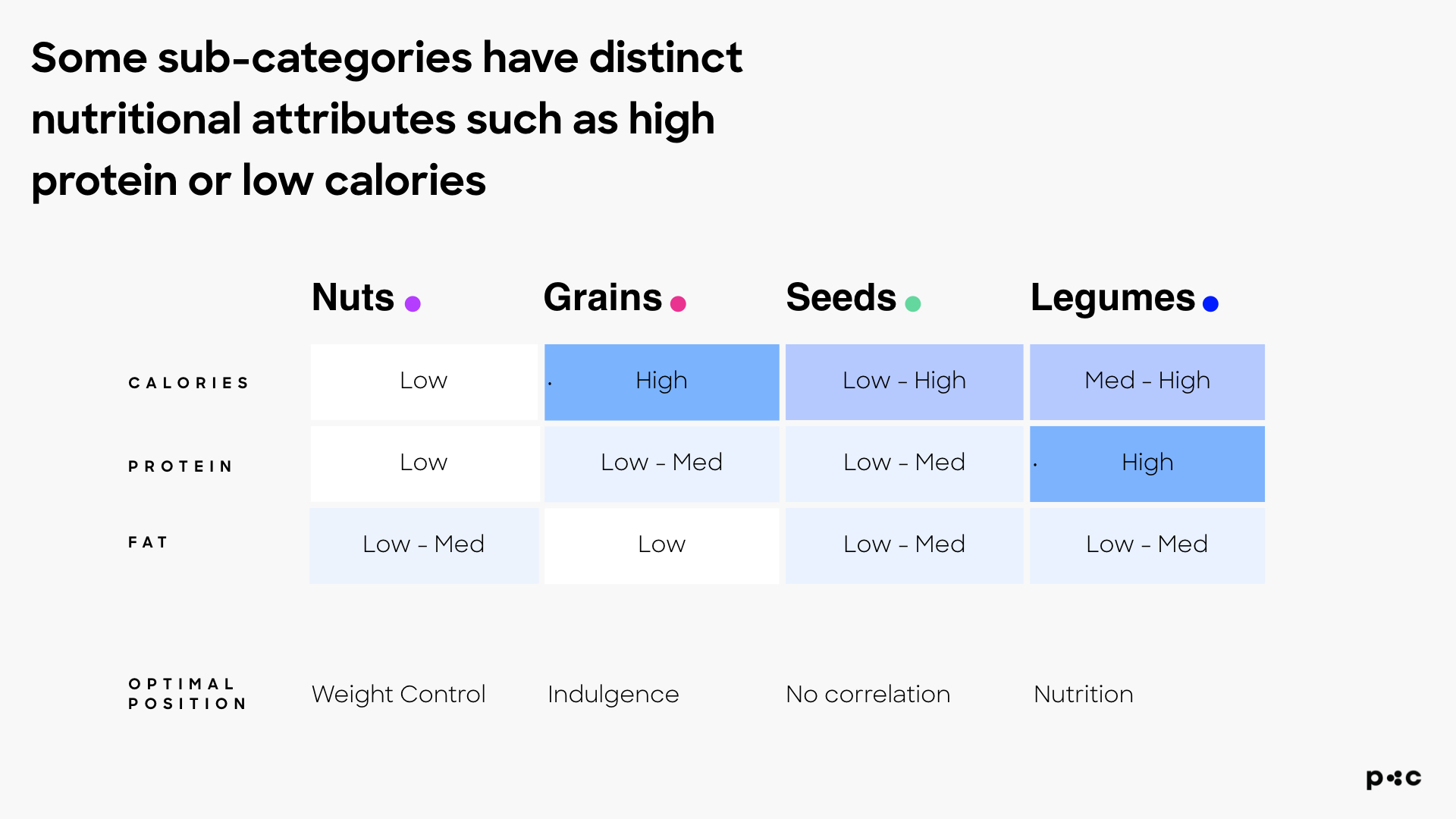 We then surveyed 26 of the leading plant milk companies and their products to develop a competitive product map, so our client could assess the investment potential of each product class. 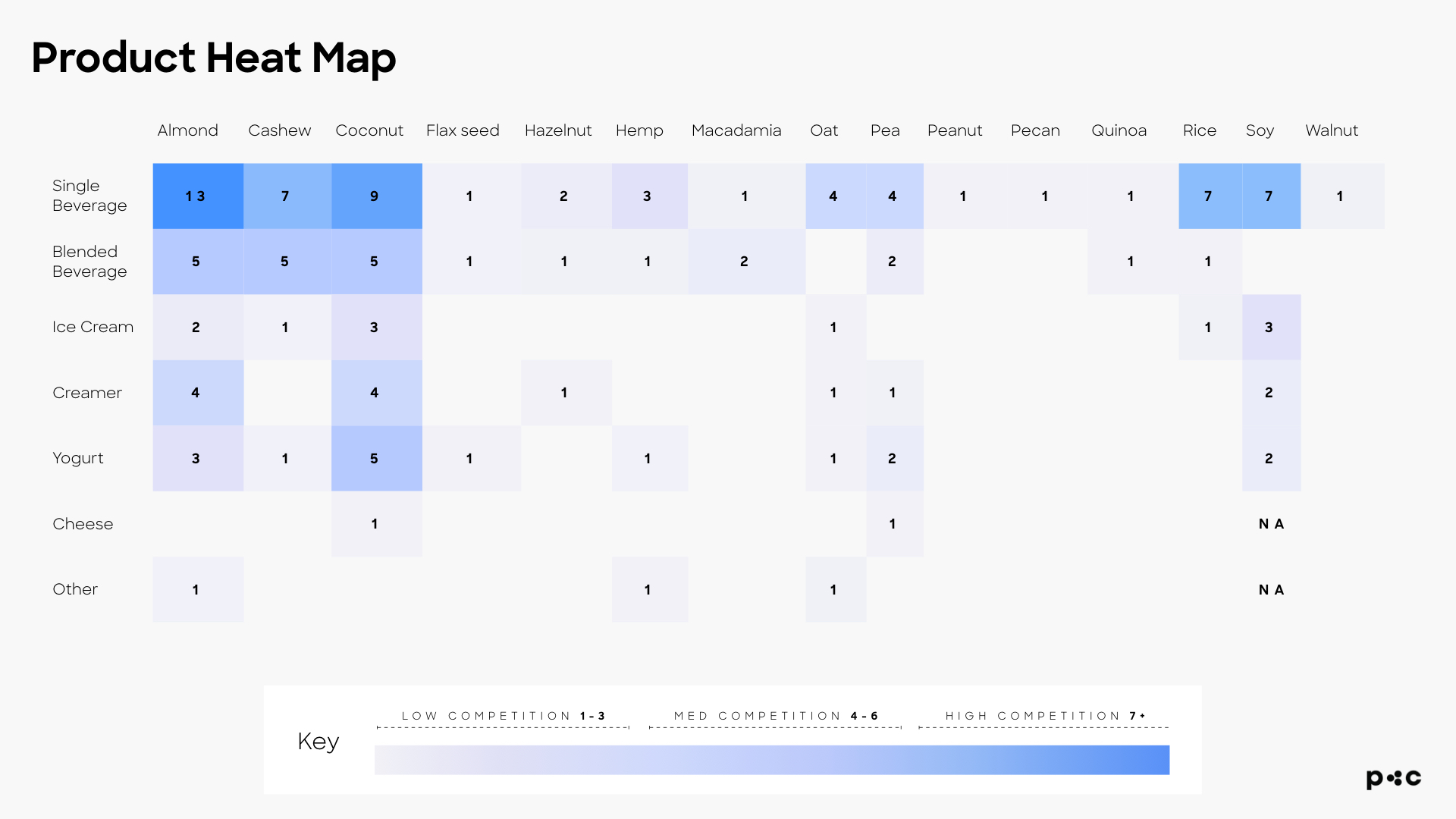 It became abundantly clear that classic plant milks like Almond, Cashew, Coconut, Rice and Soy were highly competitive – both due to their long-standing presence in the market and their wide consumer adoption.

Newer plant milks like oat and pea showed moderate competition, but are at risk of becoming crowded as major companies like Pacific Foods begin copying the suit.

However, our analysis did point out that even in highly competitive regions, there is room for a plant milk product so long as it addresses a consumer whitespace in terms of its brand positioning.

Polyculture helped the client simplify their investment decision in developing a new plant milk product by offering concepts that maintained a unique brand position in the current market.

For the grain milk sub-category, we found that brands as Oatly were consistently known for their taste and indulgent qualities. Served by Baristas in trendy coffee shops, Oat Milk, which was high in calorie and unremarkable in terms of protein, was driven largely by the taste.

Polyculture found that there were functional uses for Oat Milk – typically for endurance athletes and young children who would benefit from the high calorie count. Thus, a recommendation for a performance-based oat milks targeting active consumers emerged. 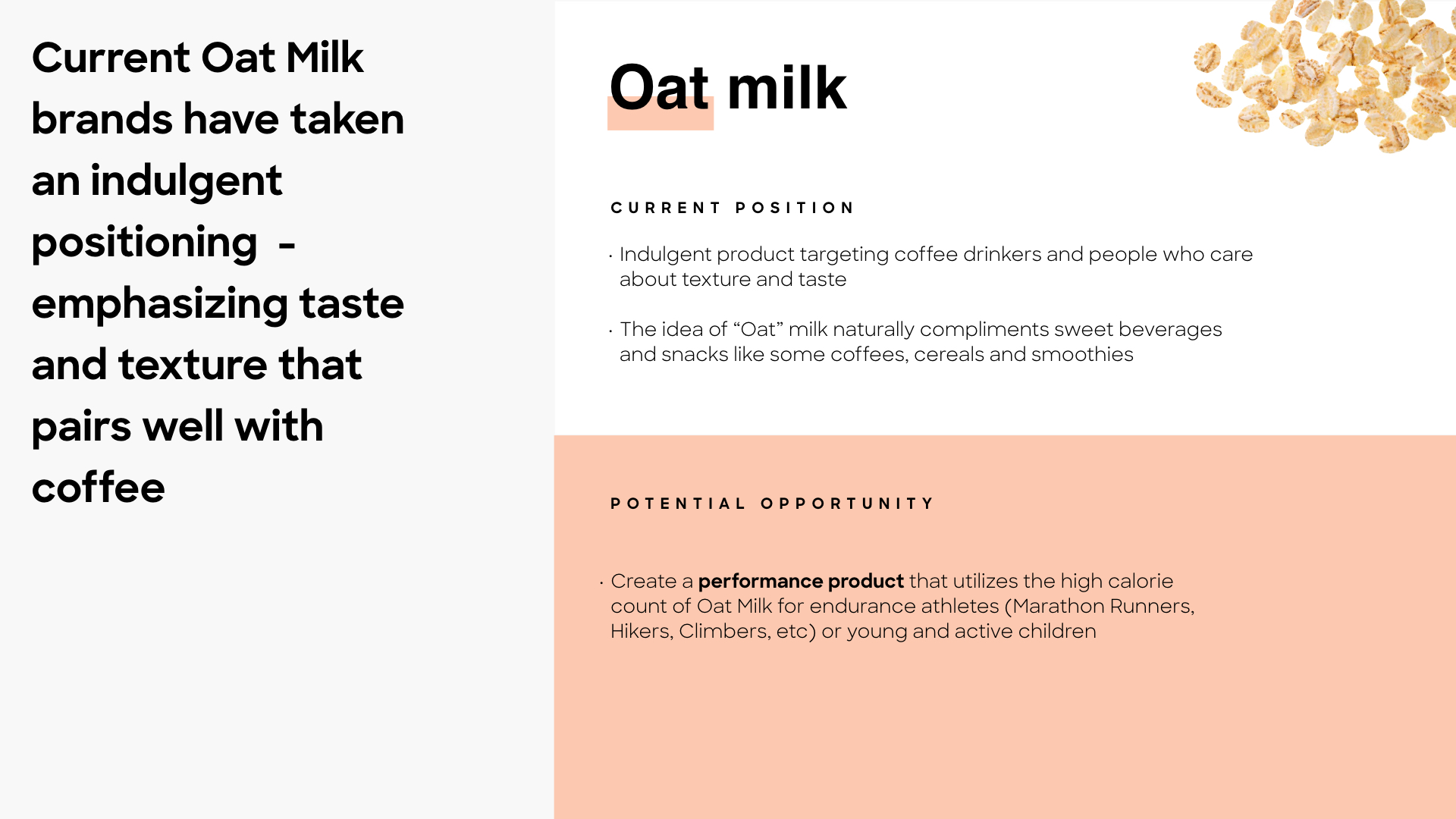 We then went onto suggest a series of brand archetypes that would work for a performance-based oat milk product targeting endurance athletes and young children. Brands like Cliff Bar, Milo and Yakult all famously offer a similar value proposition (energy through carbohydrates) for a similar audience. In other words, the success of these brands validates the premise that not all consumers are searching for low carb, high protein products. They also helped serve as a source of inspiration for our client in the creation of a brand identity. 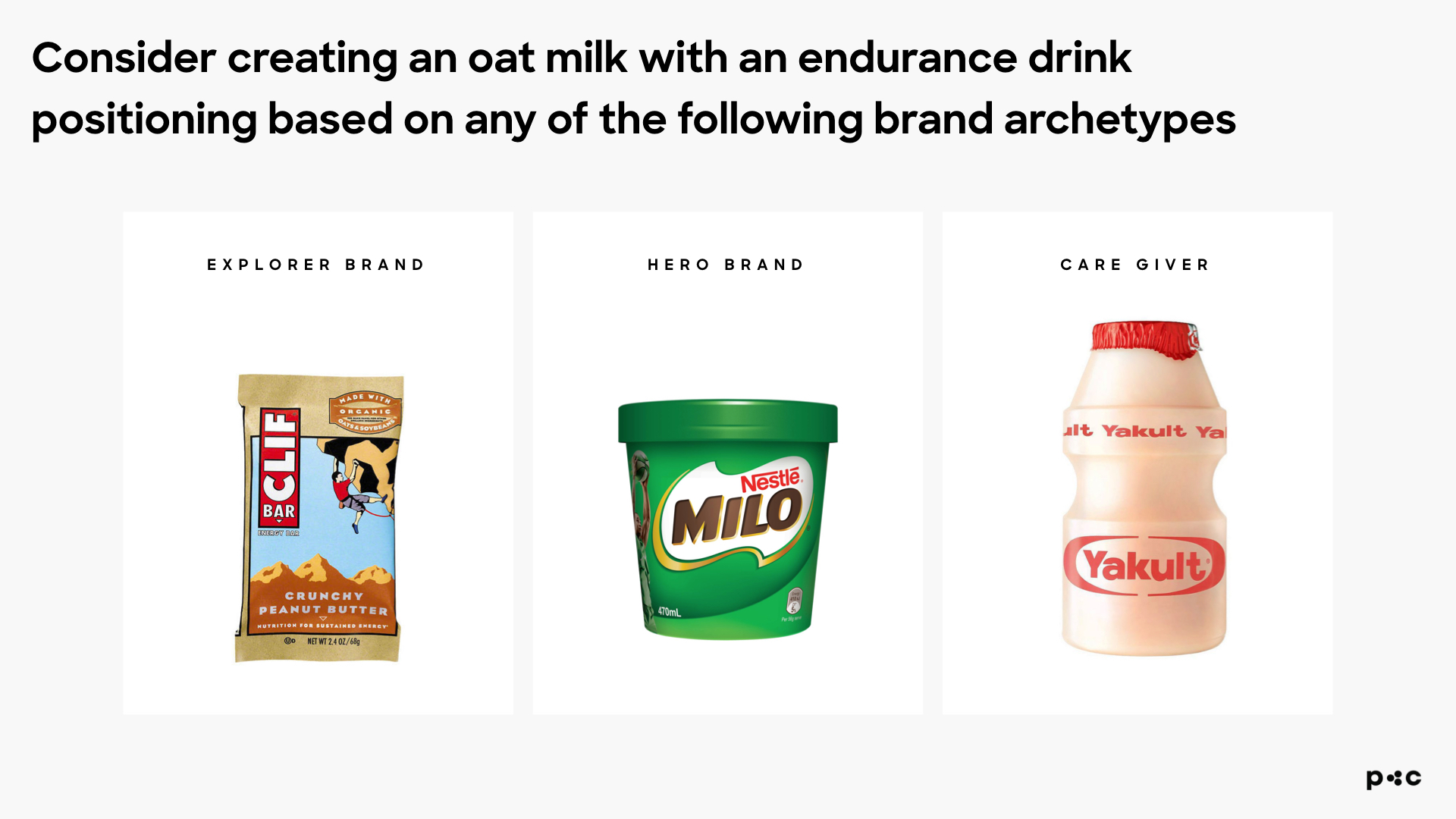 Next, we considered the pea milk sub-category, which is typically positioned as a nutritious, protein-rich non-dairy alternative for kids and active users. Pea protein isolate is also frequently used in a wide variety of body building products – further suggesting that pea milks naturally lent themselves to a similar reputation.

Polyculture advised the client to explore potential use cases of pea milk that were about indulgence as opposed to performance. Rather than making yet another “good-for-you” soy milk, Polyculture recommended introducing line of savory pea milk products that could serve as substitutes for cream cheese, Alfredo sauces and salad dressings – innovations that were currently lacking in the market.

Polyculture then suggested “Explorer,” “Innocent” or “Care-Giver” brand archetypes that would naturally support a line of pea milk-based savory salad dressings, cheeses and creams. An explorer brand would tap into a segment of consumers who were naturally adventurous and curious about trying new things; an “Innocent” brand would be perfect for family-style cream cheeses that radiate sincerity and comfort; while, a “care-giver” brand, like Newman’s Own, would offer consumers reliability and trust – emotions in line with savory products you’d be comfortable having at your dinner table. 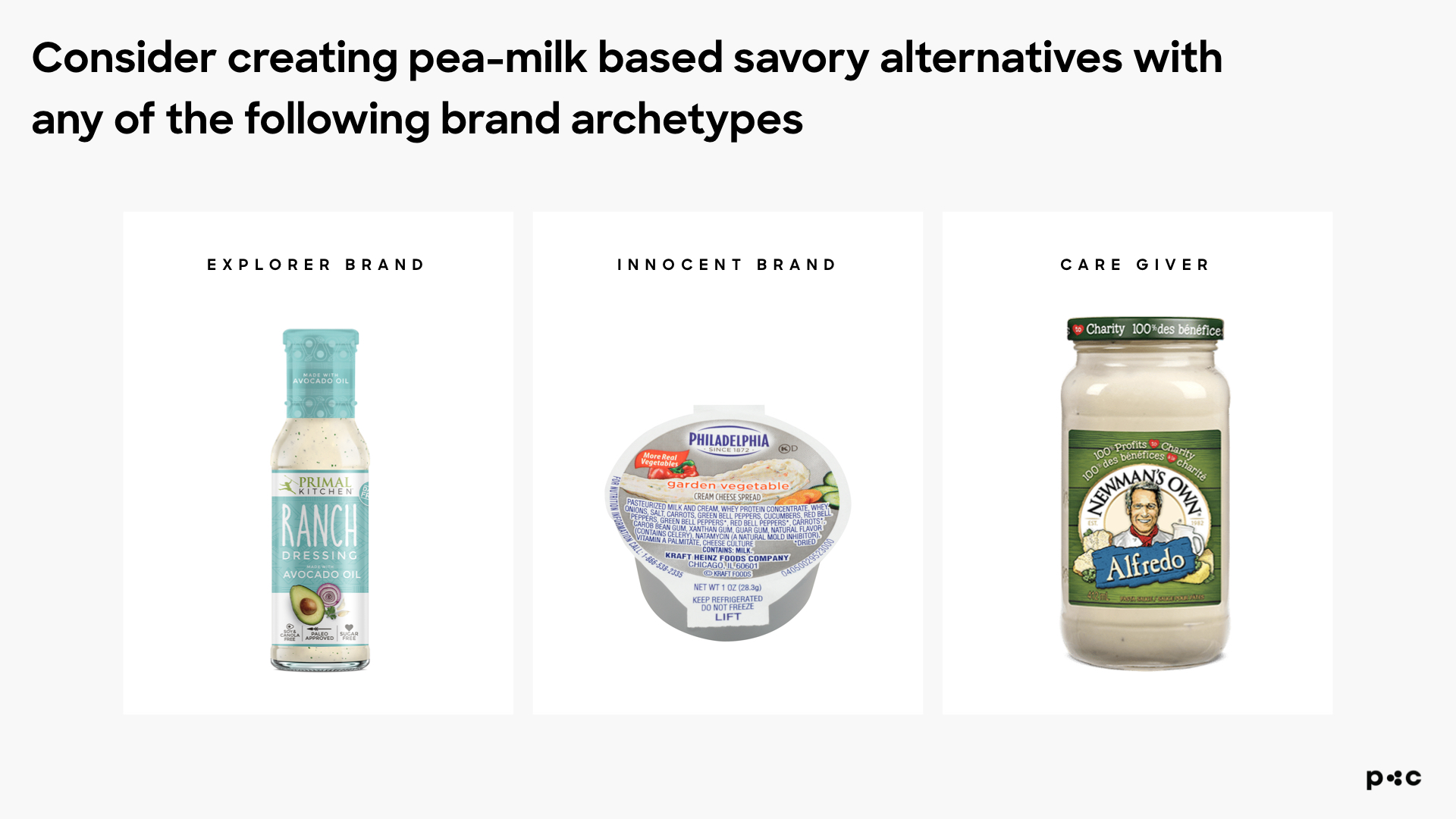 Coconut Milk had a long history in the alternative non-dairy space and a new potential product would require a large differentiator to stand out. Being a nutrient light product compared to legumes and other nut milks, we recommended that the client consider creating a “coconut fiber milk” that would target people looking for digestive comfort. 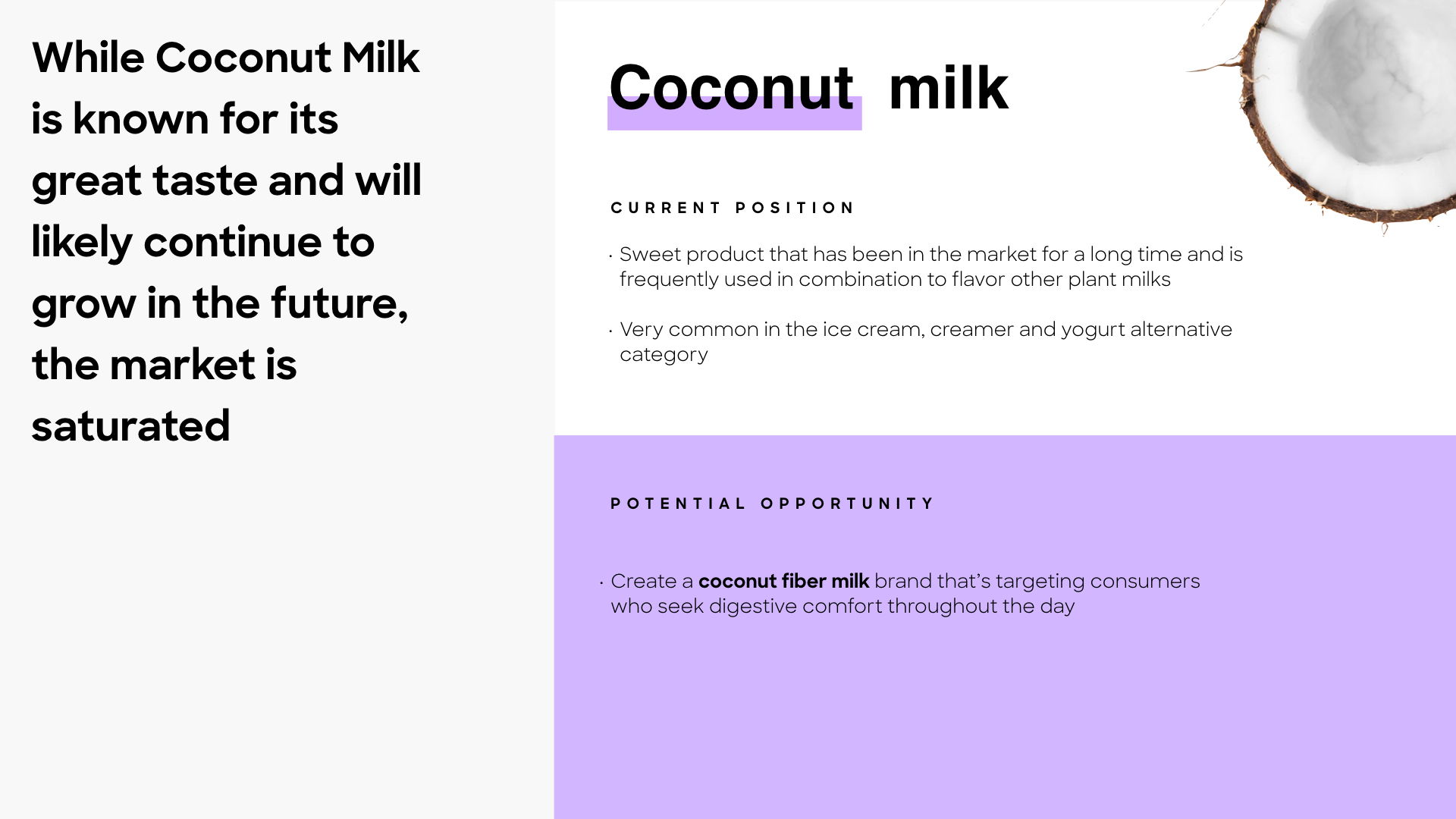 With the main value proposition of digestive comfort, we suggested three possible brand archetypes that could inspire the client’s product development. We found that a coconut fiber milk could lend itself to being a hero brand like Muscle milk, an innocent brand like Chobani or a care giver brand like Digestive Biscuits. 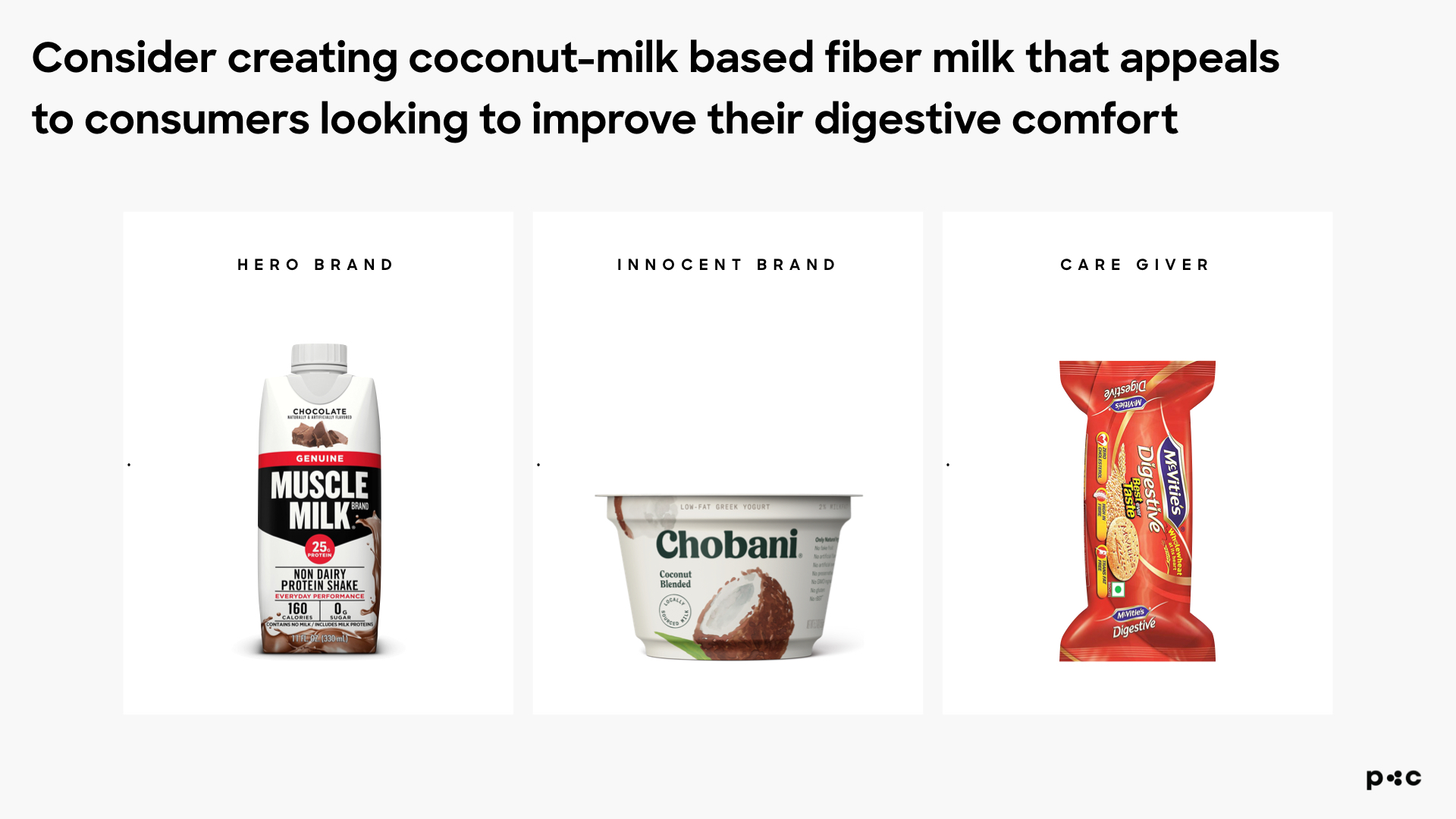 Finally, alternative plant milk using seeds as its base presented a unique opportunity to introduce a hemp milk product. With few competitors, Hemp Milk was a promising base, but it presented a few challenges – notably its perception of poor taste. With high fat as its main differentiator, the only Hemp Milk product Polyculture found to be viable would be positioned to serve consumers on keto-genic diets (high fat, no carb). The market size was relatively small, but the tight customer target offered a level of focus that could make it a viable product. 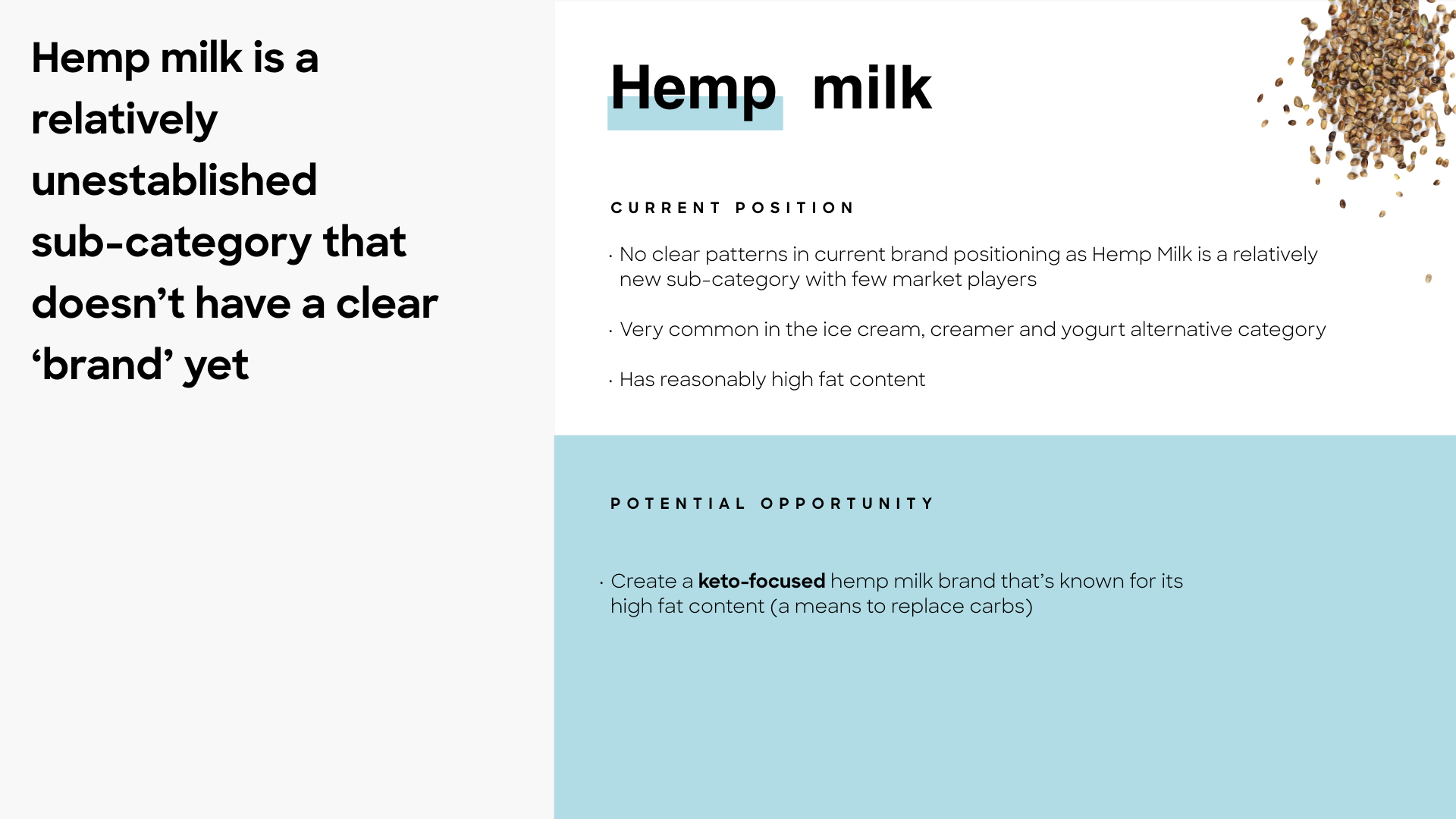 Polyculture recommended that a keto-focused hemp milk product could easily leverage either the Hero Brand, Explorer Brand and Outlaw Brand archetypes. A Hero Brand would play into the idea of supporting the ketogenic consumer in their nutritional quest; an Explorer Brand would cater to consumers curious about the rising popularity of Hemp and its unique benefits; and an Outlaw Brand could appeal to the keto-user’s natural inclination to be “outside of the pack.” 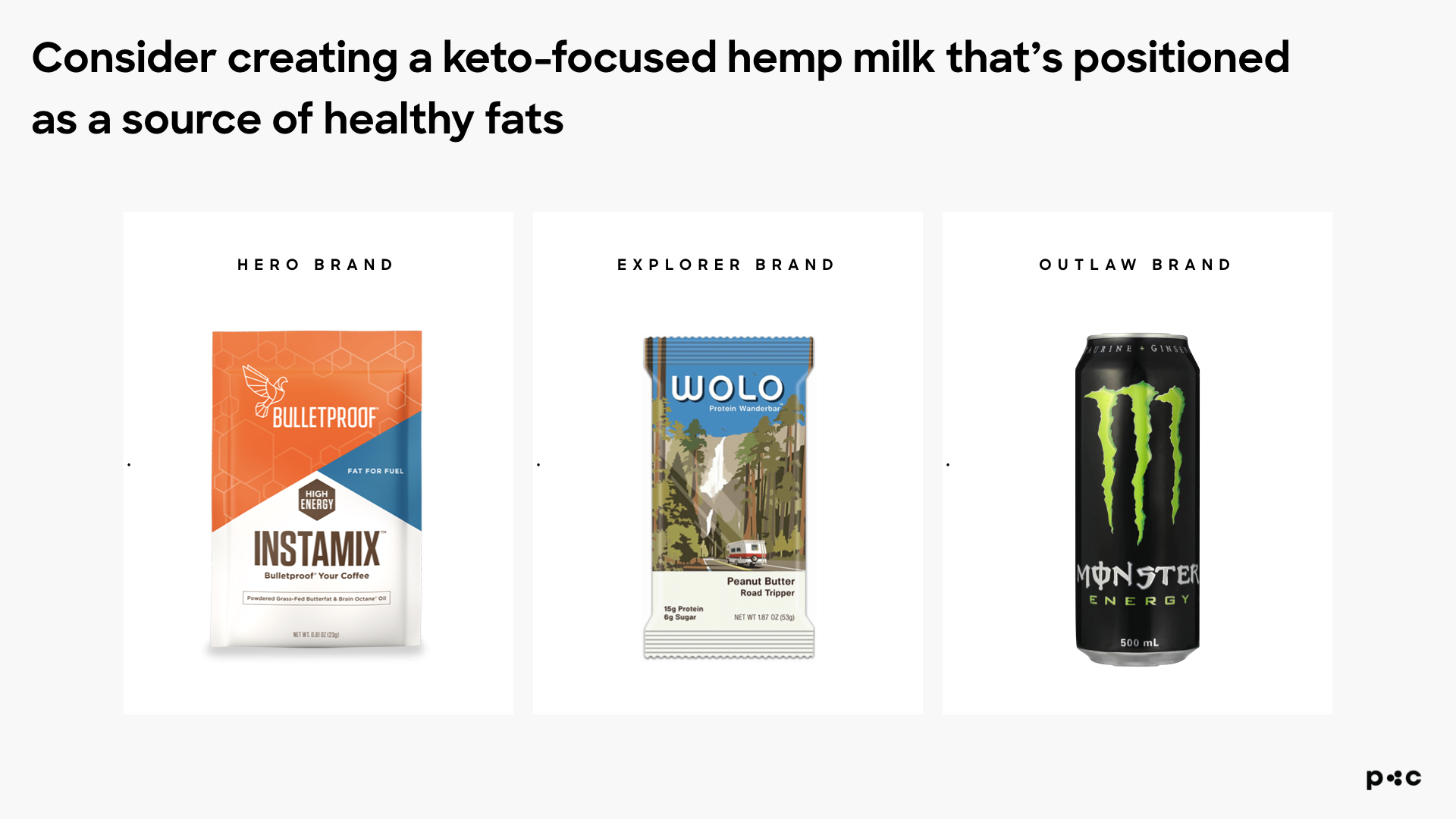 Overall, the client used these insights and decided to move forward with their investment in the alternative plant milk market. As of February 2019, they’ve developed and tested a new product that they hope will create a new sub-category and stand out on shelves in terms of its brand and taste.